An Exercise in Endurance

An Exercise in Endurance

“Just one more!” Over the course of an hour, my personal trainer, Mary (not her real name), must say this to me at least twenty times. For me, those three words have become synonymous with another phrase: “More pain!” 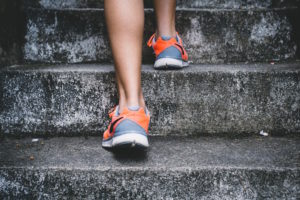 I’ve done a fairly good job avoiding routine exercise for most of my life, but a few months ago, health issues compelled me to join a gym. Knowing that I wouldn’t be able to keep myself on task, I took the additional step of hiring a personal trainer to guide me through a series of one-on-one sessions.

In almost no time, Mary had me running in place, doing squats, lifting weights, and using machines I had never even imagined existed, let alone had used.

Mary would often take me through a routine where I’d be expected to do three sets of the same exercise while resting in between. My inward (and, eventually, outward) groaning would begin halfway through the second set as I felt myself flagging, but Mary remained calm, ever adamant that I could do it.

Much to my surprise, I usually could!

I believe God disciplines us in a similar way. Many times in my life, I have gone through sets of particularly unpleasant circumstances, and was extremely relieved to get out of them, only to find that, several years down the road, I would go through an eerily similar set of circumstances!

When it would happen a third and a fourth time, I’d start to ask myself: Why is this happening to me? More often, I’d complain that I couldn’t do it again.

And yet, when I looked at those repeated situations through the lens of prayer, I realized that they were actually lessons. They were times where God taught me how to become disciplined. Then there were other times when the repetition of the situation—after some time had passed in between—reinforced disciplines I had already learned.

Although I didn’t always enjoy it, it was a crucial process: one of strengthening what was once weak.

Pain With a Purpose

The writer of Hebrews reminds us of this: “No discipline seems pleasant at the time, but painful. Later on, however, it produces a harvest of righteousness and peace for those who have been trained by it.” (Hebrews 12:11)

When life sends discipline our way, we may react with distaste. Yet what’s true for bodily exercise applies to spiritual growth, too: sometimes you have to fight a certain battle, or repeat the same routine, more than once, in order to find the victory that comes with learning the lesson.

This has been especially meaningful to me since the guiding word God gave me for this year was “endure.” At first blush, I thought it meant that I was just going to have suffer through whatever was coming. But when I looked up the word that is translated as “endure” in Hebrews 12, I found that it is the Greek hypomonē, a word that means “steadfastness, constancy, endurance.”

I realized that God didn’t mean for this time to be one of gritting my teeth and waiting for whatever was to come. Instead, His intention was for me to learn to be steady, to persevere, and to bear bravely and calmly. Rather than invoking a picture of myself barely being able to withstand an onslaught, I started picturing myself standing tall, not overcome by whatever winds and rains came against me.

I call Hebrews 12 “the endurance chapter” because of how often it uses the words endure, endurance, patience, and perseverance. In this chapter, the writer encourages us time and time again to persevere, reminding us that our spiritual ancestors, and indeed the Lord Himself, have all done the same.

Therefore, since we are surrounded by such a great cloud of witnesses, let us throw off everything that hinders and the sin that so easily entangles. And let us run with perseverance the race marked out for us, (2) fixing our eyes on Jesus, the pioneer and perfecter of faith. For the joy set before him he endured the cross, scorning its shame, and sat down at the right hand of the throne of God. (3) Consider him who endured such opposition from sinners, so that you will not grow weary and lose heart. (Hebrews 12:1-3, NIV, Emphasis mine)

Endure hardship as discipline; God is treating you as his children. For what children are not disciplined by their father? (Hebrews 12:7, NIV, Emphasis mine)

The word translated as “discipline” in this last verses is the Greek paideía, which refers to education or training. It’s all about the cultivation of mind and morals, though it also includes taking care of the body. All of these different kinds of discipline are means by which Father God helps us to become more of who we truly are.

This was brought home to one of my clients when the Lord spoke to her in her journaling time and said,  “You have never learned discipline. You were never taught discipline. That’s not who you are. Respect yourself. Take my strengths, my confidence in you, my love for you until you own it in yourself.”

These words reminded me of Mary, and how, when I had the least confidence in my ability to do the moves as instructed, she would do them with me. And just as I took courage from her exercising alongside me, we, too, can draw strength from walking in our Lord’s footsteps until we learn how to walk in His ways for ourselves.

In his book Fathered by God, Steve Bydeley defines the difference between punishment and discipline:

Our task is to embrace discipline and not shy away from it. It is not punishment and condemnation from God; rather, it is a process that has eternal value, and that the Father uses to raise up sons and daughters in the image and likeness of His Son, our Lord Jesus Christ.

Spiritual strength is developed in a similar way to bodily strength. Read below to learn more about how muscles grow!

Underlying all progression of natural muscle growth is the ability to continually put more stress on the muscles. This stress is a major component involved in the growth of a muscle and disrupts homeostasis within your body. The stress and subsequent disruption in homeostasis causes three main mechanisms that spur on muscle growth.

In order to produce muscle growth, you have to apply a load of stress greater than what your body or muscles had previously adapted too. How do you do this? The main way is to lift progressively heavier weights. This additional tension on the muscle helps to cause changes in the chemistry of the muscle, allowing for growth factors that include mTOR activation and satellite cell activation.3

Muscular tension also most dramatically effects the connection of the motor units with the muscle cells. Two other factors help to explain why some people can be stronger, but not as big as other people.

If you’ve ever felt sore after a workout, you have experienced the localized muscle damage from working out. This local muscle damage causes a release of inflammatory molecules and immune system cells that activate satellite cells to jump into action.This doesn’t mean that you have to feel sore in order for this to happen, but instead that the damage from the workout has to be present in your muscle cells. Typically soreness is attenuated over time by other mechanisms.

If you’ve ever felt the burn of an exercise or had the “pump” in the gym, then you’ve felt the effects of metabolic stress. Scientists used to question bodybuilders when they said the “pump” caused their muscles to become larger. After more investigation, it seems as though they were onto something.

Metabolic stress causes cell swelling around the muscle, which helps to contribute to muscle growth without necessarily increasing the size of the muscle cells. This is from the addition of muscle glycogen, which helps to swell the muscle along with connective tissue growth. This type of growth is known as sarcoplasmic hypertrophy and is one of the ways that people can get the appearance of larger muscles without increases in strength.